2020 was the year we weren’t expecting to see anything from the WWE 2K franchise. After a rocky launch for WWE 2K20, the wrestling simulation franchise decided to take a step back for the year. To my surprise, this didn’t mean a wrestling video game was off the table. Taking a leaf out of NBA Playgrounds book, 2K and Saber Interactive took the sport of wrestling and turned it into a casual gaming experience. This lead to WWE 2K Battlegrounds, an arcade version of wrestling which, for the most part, fills the void where wrestling simulation would have been this year.

First and foremost this ISN’T the wrestling simulation you’re used to, nor is it a simulation at all. Before stepping into the Battlegrounds ring it’s best you leave all seriousness at the door. WWE 2K Battlegrounds is more of a casual experience filled with caricature versions of your favourite wrestlers. More than 70 of them to be exact, most of which are unlocked via progression or micro-transactions. Anything is possible in the world of the Battlegrounds and most of it’s unrealistic. I know, that word is already used a lot to describe wrestling by most. But remote controlled goats, flinging oppenents in the air and using motorbikes as weapons is definitely something else. All of which are executed in quick matches that shouldn’t last more than 10 minutes. 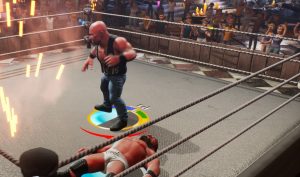 With that said, it doesn’t fall far from the WWE 2K franchise tree as it contains most of the trimmings found in the regular simulation. As with any wrestling game, Exhibition mode is where I had my first Battlegrounds experience. Both during my review and my early access hands-on. It’s a good launching pad to find your bearings with the different modes and gameplay. But it honestly won’t take very long to feel like you’re becoming a pro.

WWE 2K Battlegrounds can easily be picked up by any type and age of gamer. Very early on I already felt like I mastered the game, which was also due to fluking a few special moves. Because of its arcade aspect, there aren’t a plethora of moves or combos to memorize which also gained a tick from me. I’ll admit I’m extremely amateur at being any good at wrestling/fighting games. My go to is hitting punch, kick or block and hoping for the best. That’s not to say it’s all button bashing, although at times it did feel like that’s all I had to do gain an advantage on my opponent.

After learning the ropes across all modes in Exhibition, I expanded upon the rest of WWE 2K Battlegrounds offerings. Battlegrounds Challenge caught my eye next, but before I could tackle the challenge head on I had to create my own wrestler. For what the game is, Character Customization is neither basic nor complex. Apart from hair styles, face presets and clothing you won’t get to detail your characters as heavily as in other simulations. However you can still give your wrestler their own flare through tattoos, makeup, entrance animations and even signature moves. As with the large roster of wrestlers, there are cosmetic micro-transactions also found in Character Customization.

Like most other games of this nature, there’s both an in-game earnable currency called Battle Bucks and the real money bought VC. This only ever leaves a sour taste in my mouth, and many others, if it’s not just for cosmetic purposes. The way it’s worked in Battlegrounds however is neither sweet, sour or salty. The feeling is pretty neutral, I’m not big on it but I’m not fussed either. Pay-to-win in WWE 2K Battlegrounds is only ever felt through purchasing WWE Superstars. There is another way pay-to-win can be taken advantage of and that’s through upgrading your personalized wrestler. However that would seem like a huge waste.

Battlegrounds Challenge allows you to upgrade your wrestler through winning fights, obtaining currency and then spending it on skill tree points. At first I was really excited to go on this journey, however not even half way through and all motivation was gone. Not that it became boring, It’s just I had upgraded my wrestlers skill trees by this point. All three of them. Without even using real money. I obtained enough Battle Bucks with little effort to max out my wrestler. And because of this, I didn’t feel the need to continue with the rest of the fights. There were rewards still available across the multi-path board.However I already snatched up all of the big rewards first and was left only with much tinier amounts.

I feel very conflicted about my feelings towards Battlegrounds Challenge. I’m happy you don’t NEED to spend real money but at the same time I hate how it’s too easy to reach your end goal. The balance just isn’t there for it to properly work. Everything on the skill tree also costs the same amount. It’s a great mode on paper but needs to be executed a little better to give someone like me more motivation to complete it. 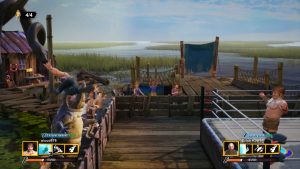 Outside of Battlegrounds Challenges, you can use your own wrestler in other modes such as Exhibition, King of the Battlegrounds and Tournaments. Both King and Tournaments are online multiplayer modes yet the former is the only one I had any luck with. Unfortunately I couldn’t find an online match in Tournaments, which is a shame because I was really keen to enter the Steel Cage Tourney. A mode which has been my favourite since my hands-on preview.

For an arcade version of a wrestling game, the last thing I expected was a campaign mode. Neither of the NBA Playgrounds games had a campaign. Set out as if you were reading a comic book, the WWE 2K Battlegrounds story is about Paul Heyman searching the USA (and Mexico) for the next WWE Superstar. With the help of ‘Stone Cold’ Steve Austin you travel the country pitting WWE Superstars against everyday wrestlers in their own backyard.

This is mainly where the zaniness of Battlegrounds stems. Through story progression you’re able to unlock not only other wrestlers but also wrestling rings which come with over-the-top unrealistic interactive components. As previously mentioned you can control a goat via remote to ram your opponents in Mexico or throw them into an alligators mouth in Florida.

At first this felt like Battlegrounds Challenge, pretty easy at first but unlike the Challenge I felt a lot more motivation. But a few locations in and it took a sharp left. It was no longer about bashing buttons. It was time to adapt to my opponents and how they fought. I finally felt challenged. Unfortunately I felt a bit too challenged. In complete honesty I’m yet to finish off the campaign but that’s not to say I won’t. I need the right mood, energy and patience to tackle it. I’ve come so close but am yet to succeed.

I’m interested to see how the story wraps up even though I don’t have high expectations. As harsh as it sounds I never expected award winning writing. Not to come off as if I’m saying that it’s garbage. It’s more so that it shouldn’t be a story that requires a whole lot of depth. Again, this is an arcade game and it’s meant to be a bit of silly fun. The comic book style adds a cool touch as well. I was kind of expecting a little more than just static images of comic book pages. Maybe a little bit of animation would of added some spark to it.

While I lost motivation in some areas, WWE 2K Battlegrounds succeeds in being a fun game in others. It still has that WWE feeling, just much watered down.

WWE 2K Battlegrounds is available on Playstation 4, Xbox One, Steam and Nintendo Switch.