For the low price of $79.95 per year, Xbox Live Gold membership gives you $1000 in free games, including backward compatible Xbox 360 games for the Xbox One. That is amazing value considering the caliber of some of the games that become available. July’s Games with Gold lineup has been announced with Inside, Big Crown: Showdown, Castlevania: Symphony of the Night and Meet the Robinsons. If you haven’t done so already, you definitely should upgrade to the Xbox Game Pass Ultimate plan for all the benefits of Xbox Live Gold, plus over 100 console and PC games as part of Xbox Game Pass. 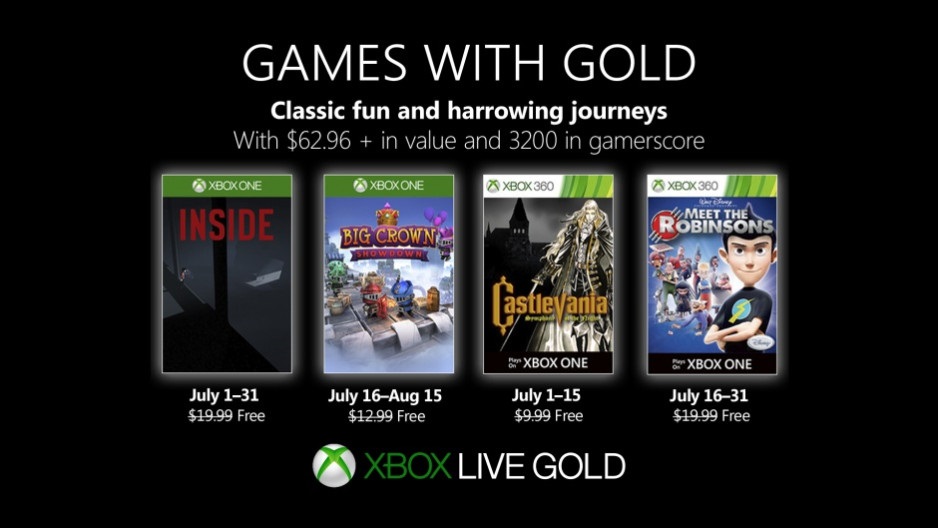 Inside
Available free from 01 July to 31 July 2019
Originally released on 29/06/2016 developed and published by Playdead
Play the critically acclaimed and award-winning puzzle-platformer, Inside. Hunted and alone, take control of a young boy through creepy atmospheric environments, survive all forms of deadly traps and enemies and journey your way to the heart of a covert institute. What mysterious horror await? Our man Jared reviewed Inside last year.

Big Crown: Showdown
Available free from 16 July to 15 August 2019
Originally released on 14/12/2018 developed by Hyper Luminal Games Ltd and published by Sold Out Sales & Marketing Ltd
Your friends become your foes in Big Crown: Showdown. Compete for the crown in 4-player local or online multiplayer in three wacky worlds full of medieval shenanigans. Engage in frenzied fights and avoid perilous hazards in a fun and entertaining title for all ages.

Castlevania: Symphony of the Night
Available free from 01 July to 15 July 2019
Originally released on 23/06/2010 developed by Digital Eclipse and published by Konami
Dracula’s castle has risen again and it’s up to you to save the world from the nocturnal threat in Castlevania: Symphony of the Night. In this 2-D adventure/RPG platformer, battle the forces of evil, upgrade your armor and stats, and solve the mystery of what became of the previous hero, Richter Belmont. Solid non-linear gameplay and multiple endings make this cult classic a must-play.

Meet the Robinsons
Available free from 16 July to 31 July 2019
Originally released on 30/12/2009 developed by Avalanche Software and published by Disney Interactive Studios
Save the future by traveling to the past in Meet the Robinsons. Based on the animated movie, help Wilbur Robinson pursue the dastardly Bowler Hat Guy and his robotic hat, Doris, through time and thwart their evil plans. Armed with a collection of scientific gadgets, solve puzzles and battle your enemies to fix the time stream!