Attention! Attention please! This is something you don’t want to miss out on! Xbox Mini Fridge Preorders are back! Well almost. In an email sent out to their customers EB Games have confirmed that at 11am Wednesday 24th August, limited preorders will be taken for the much desired mini fridge. 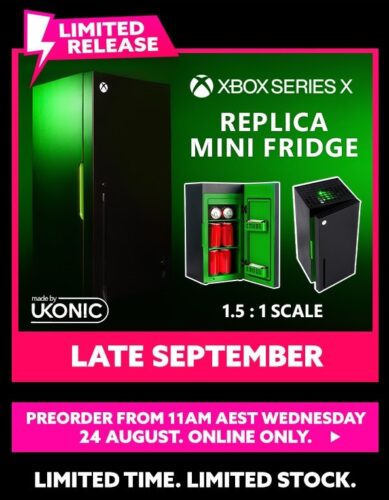 This 10L mini fridge can hold up to 12 small cans or 10 375mL cans and comes with small snack shelves on the door. Cooling items to 20 degrees Celcius below the ambient tempurate and coming with a USB charging port on the front the Xbox mini fridge is a must for any Xbox fan. The top of the fridge and Xbox logo even light up just like a real Xbox Series X would do!

Originally put up for preorder back in April for Australians, Xbox Mini Fridge preorders is a welcome sight for those that missed out. If you’re lucky enough to secure one, delivery will be late September. Customers that were able to secure Xbox Mini Fridge Preorders back in April were originally told that they would receive their fridge on the 31st August. Recently this was updated to late September.

The idea of an Xbox fridge was originally a meme. After the reveal of the Xbox Series X fans joked that it looked like a fridge. Microsoft leaned into that meme and actually built a life size Xbox Series X fridge and gave it to Snoop Dogg and one lucky fan. Then in October last year Microsoft announced it would be releasing an Xbox mini fridge after bribing fans to vote for them in a battle of the brands. US preorders went on sale 19th October 2021 but us Aussies were made to wait.

At AU$220.00 (plus shipping and handling), you can get your Xbox mini fridge preorder for a reasonable price. I have a slightly smaller mini fridge that was around the AU$160.00 mark when I bought it about five years ago so that price for a slightly larger, Xbox branded one sounds fair.

Get your Xbox Mini Fridge Preorders in Wednesday 24th August at 11am AEST!