There are many words to describe my time with Zombie Army Trilogy varying across multiple moods. In some particular order: fun, overwhelming, a little terrifying, frustrating, satisfying. Zombie Army Trilogy is another port for the Nintendo Switch that not only separates the amateurs from the Elites but showcases how the console can improve the overall experience with the shooter genre.

Originally released in 2015, Zombie Army Trilogy is the spin-off to Sniper Elite and still includes all the creamy slow-mo X-ray moments you could ask for. Which is about 90% of the screenshots I saved for this review. I’ve even included some of my favourites. 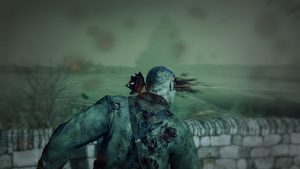 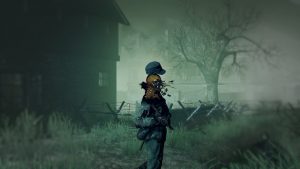 Zombie Army Trilogy has a much darker and terrifying setting in comparison to Sniper Elite, giving us a re-imagining of how evil Hitler could have been. World War II is almost over with Hitlers army on the brink of defeat. However this is a story the history books never taught us. Not one to surrender, Hitler decides to pull out the big guns and execute Plan Z bring his army back from the dead. Only you and up to four other team mates can put a stop to Hitlers army of darkness once and for all. And trust me, you’re going to want to bring your army of mates to the war.

The campaign for Zombie Army Trilogy is a lot more casual than expected and doesn’t follow the usual rules of progression. I was surprised to find that I could start the campaign at any of the five chapters included in each episode. But as I progressed I found this to become more of a blessing. As per normal video game introduction Zombie Army Trilogy goes easy on you in chapter one, Slowly feeding me zombies to easily pick off, I soon realized I was being given some false hope in regards to future progression. However I was really enjoying the sniper mechanics, particularly the sweet headshots. Although it’s taken influence from Sniper Elite, Zombie Army Trilogy also makes you rely heavily on close-quarters combat as well the strategic use of mines and bombs. This isn’t the sort of mission you go into guns blazing and I learned this shortly after completing my first chapter. 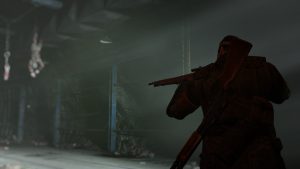 The feeling of being overwhelmed while playing Zombie Army Trilogy is, unfortunately, normal. While chapter one of Episode One was enjoyable, chapter two brought a bit more frustration to the table. And so on and so forth. Even though I’d be up to the last fight of the chapter, at times I couldn’t fight the urge to throw in the towel and move onto the next one. Each chapter offers a mixture of both easy to handle encounters and borderline hectic horde like fights. The latter being my least favourite gameplay mode, especially when I’m flying solo. The battle against Nazi zombies can happen anywhere, from large open areas to small narrow hallways and stairwells. It becomes a constant case of trial and error figuring out how to tackle the hordes of zombies efficiently. Positioning, tactics and patience play a huge part in success and the last thing you want is an empty magazine or being cornered by deadly mobs. As a solo player, this was a lot to try and handle on my own but Zombie Army Trilogy can also be played in online and local play with three other friends.

While gameplay is the same through out the three episodes I found each to be slightly different than the last. The first being the most overwhelming with a difficulty spike at chapter two. Not the most enjoyable experience since I was really having fun with the game up until this point. Episode Two felt slightly more forgiving but still throws in a vicious amount of difficulty just as you’re feeling comfortable. However it wasn’t until Episode Three where I found my footing. The level design gave me a chance to use my sniper skills more efficiently and allowed a lot more freedom in regards to tactical movement. Hectic close-quarters combat isn’t my forte and by this point I was sick of getting myself stuck in a corner caught with my pants down (metaphorically.) As a long-time ranged specialist, I like to execute my kills from as far away as possible. I came in expecting a sniper game and I felt like I was finally getting it. There’s also a horde mode separate from the campaign featuring different location scenarios but I’ll admit I didn’t spend much time in them. I already felt like I had slayed through enough hordes of zombies during the campaign. 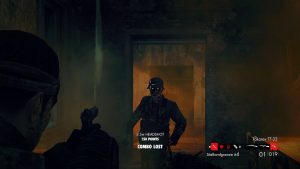 Zombie Army Trilogy didn’t just get a simple port over onto the Nintendo Switch, By using the Switch’s hardware capabilities the games adds a cool feature that offers extra precision for your aim. Enabling motion controls in-game means that while in hand-held mode, you can move your Switch around to aim instead of using Joy-Cons. Alternatively you can use your Joy-Con/Pro Controller to do the same while docked but it definitely doesn’t have the same feel or precision. But it took a while to get used to the one gun type I hoped motion control would be useful for, sniping. Scope movement while aiming feels tight with only a narrow range, requiring extra assistance from the Joy-Cons as well. Whilst achievable, it does have some getting used to. For myself I didn’t feel like my aim became obviously better as I’m a console gamer by heart with a steady aim while using a controller. However this wasn’t the best motion control aiming feature I’ve come across for Nintendo Switch.

As said in this piece earlier, Zombie Army Trilogy left me with a lot of different feelings. While I had an enjoyable time picking off zombies from afar, the constant overwhelming feeling just wasn’t for me. And granted, I should have expected such thing from a zombie game. In saying that, this is definitely one game I’d prefer to play with mates to give me a helping hand.

Zombie Army Trilogy is now available on Nintendo Switch and I give it a 6 out of 10.